Ten new juveniles of one of Australia's most critically endangered freshwater turtle species have been released into the wild this week near Bellingen. 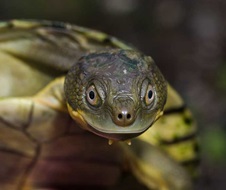 Environment Minister Matt Kean said releasing zoo-bred Bellinger River Snapping Turtles was essential for the future of the species, after a virus all but wiped it out.

"The Bellinger River Snapping Turtle has been in a fight for survival since 2015 when a virus devastated 90% of its population," Mr Kean said.

"Sixteen healthy turtles found in the river at that time were placed into a conservation breeding program at Taronga Zoo Sydney to create an insurance population.

"On the back of breeding success at Taronga Zoo, the first ten juveniles were released into the Bellinger River late last year and I'm delighted to say their survival rate has been extremely high.

"With the success of that first release, it's fantastic to be able to place the next batch back in the river with tracking devices so we can continue to monitor their health and survival."

"But putting the turtles back is only part of the puzzle, and strong partnerships remain crucial to recovering this species," Mr Kean said.

The Department of Primary Industries (DPI) is continuing its research into the virus, water quality monitoring is on-going through the Bellingen Riverwatch citizen science program and Bellingen Landcare is helping restore riverside habitat.

Further, over 3 successful breeding seasons Taronga Conservation Society Australia has been able to increase this zoo population to 80 turtles.

The work has been coordinated under the NSW Government's Saving our Species program, led by the NSW Department of Planning, Industry and Environment, which has so far invested over $300,000 in the conservation of the Bellinger River Snapping Turtle.