The NSW Government will invest $10 million over 5 years to acquire vital koala habitat and will embark on a whole-of-government koala strategy to secure NSW koala populations, Environment Minister Mark Speakman announced on 4 December 2016. 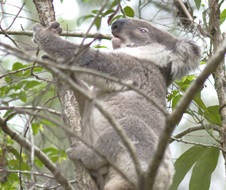 The NSW Chief Scientist and Engineer Professor Mary O'Kane AC's Report of the Independent Review into the Decline of Koala Populations in Key Areas of NSW, released today, recommended developing an overarching strategy and investing in key areas of koala habitat.

"The strategy will also complement the koala conservation work already being done under the NSW Government's flagship $100 million Saving our Species program. This work will include projects, which improve koala habitat and trialling artificial water sources for koalas to mitigate heat stress.

"The $10 million investment follows the creation in March of flora reserves totalling 120 square km on the South Coast, run by the National Parks and Wildlife Service, to protect the last known local koala population."

A 3-month consultation program will include regional community information sessions, stakeholder meetings, webinars and information/feedback via a web portal.

"We want communities to look at the independent review and provide input to help direct the NSW Government's strategy so we can preserve this iconic species for all generations to come," Mr Speakman said.