Warrumbungle National Park is fully operational again after the re-opening of the final walking track affected by the 2013 fire. 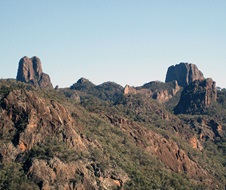 "The completion of Fan's Horizon walking track is pretty much the last piece in putting Warrumbungle National Park back together after the devastation of the fire.

"For staff who have worked in the Warrumbungles before, during or after the rehabilitation program, this feels like the last piece of the puzzle, and we can now look forward to seeing our visitors once again be able to enjoy all that the park has to offer," Mr Whittall said.

"The finalisation of track works comes after the recent reopening of our magnificent Visitor Centre and years of major works to rebuild the park and learn more about fire behaviour.

"Outside of the visitor experience, post fire projects also included a massive three-year project by Office of Environment and Heritage scientists to investigate the impacts of the fire and guide management into the future.

"Our staff have worked from across the entire National Parks and Wildlife Service and Office of Environment and Heritage to get the park back to an even higher standard than before the Wambelong fire.

"We look forward to welcoming visitors to check out the new Fan's Horizon track which is ideal for those wishing to ascend the range and get a panoramic view of the valley and volcanic features such as Crater Bluff, Belougery Spire and the Breadknife.

"We encourage you to take your time though, the Fan's Horizon walk is 3.6 kilometres, steep and takes about 2 hours return," Mr Whittall said.