Waterbirds are feasting on the mud flats of the Macquarie Marshes after a 71-day environmental watering event. 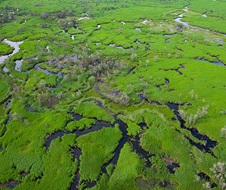 The rarely seen Australian Painted Snipe has made an appearance, feeding on insects, worms and small invertebrates whose numbers have exploded since the water’s arrival.

The NSW Office of Environment and Heritage has managed the delivery of 52,000 megalitres of environmental water, connecting the Mid-Macquarie River to the Marshes with some flows then moving through to the Lower Macquarie River and Barwon River.

'Several Australian Painted Snipe were spotted in wetlands in the southern part of the Macquarie Marshes,' Mr Hosking said.

'This vulnerable waterbird feeds on the mudflats at the water’s edge but is rarely seen because it blends so well with its environment.

'Recent monitoring has revealed a number of bird species making use of the Marshes including Australasian bitterns and royal spoonbills in breeding plumage.

'There have also been sightings of whiskered terns, a black-necked stork and sharp-tailed sandpipers – a migratory shorebird who visits our area all the way from eastern Asia.

'The October surveys recorded 130 bird species including both wetland and woodland varieties,' he said.

Flows have recently receded along the length of the mid-Macquarie River as the flow passed.

'Careful management of the timing and delivery rates for the flow event allowed us to inundate several target areas including some of the parched river red gum woodlands of the northern Macquarie Marshes,' Mr Hosking said.

'These woodlands were recognised as areas of high water need by our local advisory committee, the Macquarie-Cudgegong Environmental Flow Reference Group.

'Early results indicate we had an excellent water spread for the volume of water used, and the response from the environment in terms of frogs, waterbird diversity and vegetation growth has met our expectations.

'This event marks the end of our three-year plan for the water allocated to our accounts in the 2012 dam spill.

'We have held a relatively small volume of environmental water over for 2016, but without catchment rain it will be a pretty quiet year, as it will be for most general security account holders in the Macquarie.

'While the Macquarie has had over thirty years of environmental water use, we continue to learn by doing and improving outcomes for the river system.

'The scientific monitoring we’ve been doing over the past few months - including work on birds, frogs and the mapping of the water spread - will continue to inform the Environmental Flows Reference Group and form the basis of our reporting on the event,' he said.

The event was managed in partnership with the Commonwealth Environmental Water Office, Water NSW and the community.