Turtles Forever has moved one step closer to success with the release of the last of this year’s 141 baby Bell’s Turtles into the Roumalla Creek today. 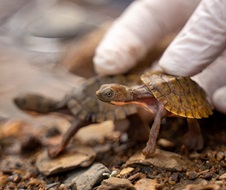 Now at its halfway mark, the 10-year project aims to bring back sustainable turtle populations in NSW’s Northern Tablelands.

When fewer and fewer young Bell's Turtles were being detected, Turtles Forever was launched thanks to a $1M NSW Environmental Trust grant led by Northern Tablelands Local Land Services in partnership with the University of New England, turtle ecologists, Canines for Wildlife and the Department of Primary Industries.

UNE researcher Lou Streeting started a PhD to look at why there were so few young turtles and found feral foxes were raiding more than 95 per cent of Bell’s Turtle nests.

“So far we have helped more than 1500 hatchling turtles join the population,” Ms Streeting said.

“Of those, more than 1000 were from nests that we protected on the riverbank, and 533 were from eggs that we incubated and hatched in the laboratory at UNE.

“We are now seeing those hatchlings surviving and flourishing in the wild as two- and three-year olds. It’s been extraordinary to be part of this project and our results provide hope for the future of Bell’s Turtles.” 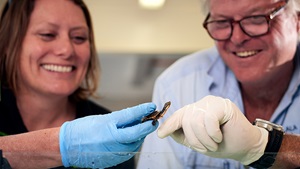 “Private landowners coming on board to allow our researchers to access their properties to protect nests with wire mesh or fox exclusion fencing has been key to the success,” Mr Dillon said.

The Turtles Forever project is protecting the endangered Bell’s Turtle which is found only in the Namoi, Gwydir, Severn and Deepwater River systems in the Northern Tablelands of NSW.

“Turtles Forever was funded as one of the Trust’s nine Saving our Species Partnerships Grant Projects, which aim to improve the chances of survival for over 30 threatened species in NSW,” Environmental Trust project officer Kersten Tuckey said.

“These markers of success, halfway through the partnership grant program, are exciting and a testament to the passion and commitment of our project partners,” she said.

Vote for your favourite NSW threatened species: Round 1