NSW’s beaches have returned one of their cleanest years in nearly a decade, according to the latest state-wide annual Beachwatch report. 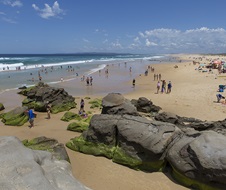 “For the first time since 2010, 85 per cent of the state’s swimming sites are rated ‘good’ or ‘very good’, and there have been improvements across the board,” Environment Minister Gabrielle Upton said.

“Estuarine swimming sites have never been this clean, with a record breaking 81 per cent listed as ‘good’ or ‘very good’.

“In addition, a staggering 98 per cent of ocean beaches were shown to be clean and safe, as were four of the five ocean baths.

“More importantly, the number of swimming spots that lifted a grade (18) is higher than those that dropped (11), which is a significant achievement,” Ms Upton said.

The State of the Beaches report is an overview of water quality at swimming locations monitored by the Office of Environment and Heritage. Local councils and water authorities are responsible for their cleanliness.

There have also been some significant category improvements, Ms Upton said.

While these figures are welcome, they also show there is still work to be done, Ms Upton said.

“According to the report, coastal lakes, lagoons and estuarine swimming spots were adversely affected by heavy rainfall.

“There are also concerns about some Sydney Harbour beaches and the NSW Government is working with the relevant councils to develop a whole of Sydney Harbour coastal management program to achieve similar outcomes on a city-wide basis.

Some sites on the Central Coast scored poorly - while safe during dry weather, moderate rainfall caused some microbial levels to rise.