$37 million in conservation funding for landholders 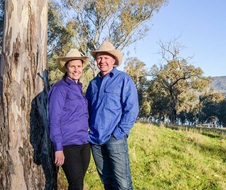 “The not-for-profit BCT has offered $37 million in its first round of programs for 2018,” Ms Upton said.

“This will deliver major benefits to the environment and support landholders to carry out important conservation management on their properties.”

The NSW Government made an unprecedented investment of $240 million over five years, and $70 million per year ongoing, in private land conservation as part of the land management and biodiversity conservation reforms.

BCT Chairperson the Hon. Robert Hill AC said the flexible program strategy was key to achieving the BCT’s goals and to meet the targets in the Biodiversity Conservation Investment strategy.

“In the coming two months we will call for up to $16 million in tenders from interested landholders to participate in the Conservation Management Program,” Mr Hill said.

The BCT has also committed $15 million to its Revolving Fund to purchase high conservation value properties to be resold to landholders committed to NSW’s long tradition of private land conservation.

“The importance of private landholders being supported to conserve and manage biodiversity on their land is being recognised in Australia and internationally.

“This is a major step forward for biodiversity conservation in NSW. I am thrilled the new BCT is open for business,” Ms Upton said.

The BCT has today released its Business Plan and has committed to offering a further $60 million to programs in 2018–19. The Office of Environment and Heritage has released the Biodiversity Conservation Investment Strategy, which guides the BCT’s investment

Budget bonanza for the state's biodiversity

Another 18,000 hectares added for conservation

Have your say on priorities for NSW land conservation

Have your say on biodiversity reforms

Have a 'RAD' holiday on the South coast and Highlands' natio...