If it weren’t for pollinators, we’d have no plants, flowers, or trees. The Aussie landscape as we know it would be a very different place without these crucial ecosystem engineers. 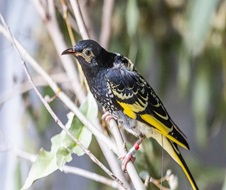 Pollination drives biodiversity, with a wide range of animals, birds and insects transferring pollen during their nectar-feeding.

While bees get a lot of the credit, there are plenty of other unsung pollinating heroes doing important work, including native butterflies, birds and bats that are listed as threatened in NSW.

To celebrate Pollinator Week, let’s meet some of the busy creatures pollinating our precious plants.

The tiny and exquisitely patterned regent honeyeater is one of Australia’s most critically endangered birds. The birds have been known to track resources across more than 500km, pollinating Australia’s iconic eucalyptus trees as they travel.

The trees they pollinate go onto provide food and habitat for many other native animals, including cockatoos, parrots, gliders and possums, making regent honeyeaters important biodiversity champions in open forests and woodlands across eastern NSW and Victoria.

To reduce the population decline of these birds, Saving our Species is working with the Taronga Conservation Society Australia and BirdLife Australia to breed and release genetically-diverse regent honeyeaters back into suitable habitats, bolstering the bird’s population in the wild. 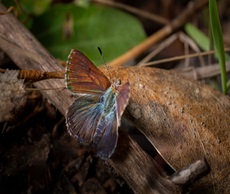 The endangered purple copper butterfly is one of Australia's rarest butterfly species, and is only found in the Central Tablelands of NSW. The butterfly is picky when it comes to its habitat, only found where a type of blackthorn (Bursaria spinosa subspecies lasiophylla) and ant species (Anonychomyrma itinerans) – with which the butterfly has a special symbiotic relationship – are present.

When the butterflies fly in September and October, they pollinate ground covers and forbs around patches of native blackthorn. Butterflies use a purpose-built mouthpiece – called the proboscis – to collect nectar. As the butterfly lands to feed on a flower’s nectar, pollen sticks to the butterfly and is then moved from plant-to-plant as the butterfly travels.

Purple copper butterflies have been observed collecting nectar from many different native plants and flowers, including Hardenbergia, Wurmbea, Viola and Davesia.

If you live in or near the Central Tablelands and are lucky enough to spot this rare butterfly, you can log your sighting on the Butterflies Australia app. In exciting news, the butterfly was recently sighted in the ACT, opening up the possibilities of where this species might occur. 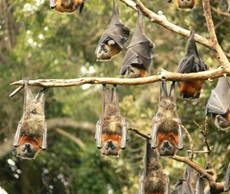 Flying-foxes are important pollinators of native plants, including Australia’s iconic eucalypt trees. This gives them the well-deserved title of keystone species, because they are crucial to holding together their ecosystem.

And because flying-foxes travel such large distances, they can disperse the seeds of rainforest plants in ways that other fruit eaters cannot.

To protect this vulnerable and ecologically valuable species, Saving our Species is working with World Animal Protection, experts from Western Sydney University and Campbelltown Council to find a solution to mass flying-fox deaths during scorching summer heat waves. In a world-first, the research partnership is testing whether water sprinklers can reduce the effects of heat stress on flying-foxes. 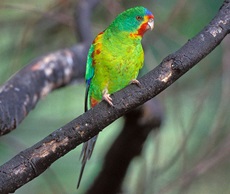 The gorgeous but endangered swift parrot migrates annually from breeding sites in Tasmania to the mainland Australia between February and October, when the weather in Tassie cools down.

Its favourite feed trees include winter flowering species like swamp mahogany, spotted gum, red bloodwood and forest red gum, which produce lots of tantalising nectar that attract the parrots. The seeds and pollen stick to the birds’ feathers when they feed and are dispersed by the parrots as they fly to other locations.

Unfortunately, with land clearing resulting in a loss of habitat and food for the swift parrot, the populations of this bird are declining. In the NSW Hunter region, Saving our Species and Hunter Local Land Services have been actively working to secure the local population of these woodland birds, now and into the future. 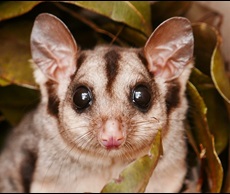 Vulnerable squirrel gliders and yellow-bellied gliders are believed to be important pollinators of the open-forests they inhabit, spreading pollen from tree-to-tree as they travel.

Squirrel gliders’ diet varies from season-to-season, consisting of Acacia gum, eucalypt sap, nectar, honeydew and manna, and getting their protein hit from invertebrates and pollen. These nocturnal bushy-tailed gourmets can ‘glide’ for up to 100m, and travel around 1km each night to sample all the delicacies on offer.

Saving our Species, WWF-Australia and Wildbnb Wildlife Habitat have built new nest boxes to provide much-needed hollow habitat for phascogales, yellow-footed antechinuses and squirrel gliders in Minyumai Indigenous Protected Area in NSW’s Northern Rivers. Several species still facing the ongoing impacts of the 2019–20 bushfires have been spotted nest-making in the boxes, with some even showing signs of preparation for breeding.

Saving our Species can’t imagine a world without our swift parrots and sugar gliders, and we’re committed to securing a future for our threatened species in the wild. Find out how you can join the movement to help.

Get the latest news for the Saving our Species program.