A glimmer of hope for Gwydir wildlife

Travel may be limited but water managers are keeping a close eye on wetlands west of Moree via remote cameras. 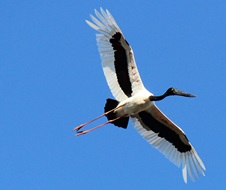 Black-necked storks have been captured on camera, along with several other bird species.

David Preston from the Department of Planning Industry and Environment said it was encouraging to see a good news story at a time when communities are facing other challenges.

‘Each morning when I check the camera feed, I look forward to seeing what our local wildlife is up to – even at a distance,’ Mr Preston said.

‘The turnaround at this site has been remarkable. The wetland was burnt out a year ago, leaving only bare soil and small patches of plant-life covered in ash.

‘Some cumbungi and marsh-club rush had regrown, fed only by the remaining soil moisture and energy reserves from their rhizomes and corms, but without follow-up rain they were starting to die.

‘Then in January, the rains came and the recovery began.

‘The cameras have given us an amazing insight into the wildlife response since then.

‘But it is just the beginning. We have a long way to go to return the landscape to good health.

‘We are on the right track and hoping for further rains which will benefit our rivers, wetlands and wildlife as well as the farms and communities in the landscape,’ he said.

Wildlife spotting from the Gwydir wetlands: