Five sets of Aboriginal remains have been returned to the Wellington Aboriginal community for reburial at Blacks Camp and at Wellington Caves. 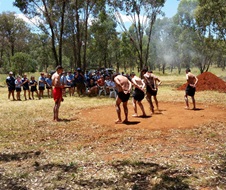 The reburial of these remains last month completed the repatriation of nine sets of Aboriginal remains taken from the Wellington district from late 1800s to the 1970s.

John Duggan, Heritage Conservation Officer at the Office of Environment and Heritage (OEH) said the remains re-buried this month were those of three men, one woman and a lower jawbone of an unknown sex.

“Little is known of the histories of these old people, but we do know that the three men lived off a traditional diet and that two of those men were put through the traditional practice of initiation,” Mr Duggan said.

“One of the initiated men was very large and robust, he was originally found within one of the caves with a stone axe beside him.”

The process to return these remains to Country began in 2015 when the Wellington Local Aboriginal Land Council (LALC) and OEH requested their return from the Australian Museum.

When the request was granted, OEH representative John Duggan, Wellington LALC CEO Leanne Stanley and five other Community representatives travelled to the Museum to bring the Ancestors home.

“Once returned to Wellington, consultation with various landholders began and four sets of those remains were reburied in 2015 at their original burial locations, Black Rock and Buckinbah Station, Yeoval,” said Ms Stanley.

“The remaining five sets were buried this month at Blacks Camp and Wellington Caves.

“Local man Paul West led the Burial Ceremony at both sites and constructed large bark caskets for each set of remains to be wrapped in before their burial,” Ms Stanley said.

OEH supports Aboriginal Communities to make sure that remains and cultural material is returned to Country in a culturally appropriate way. For repatriation matters please visit the OEH website.