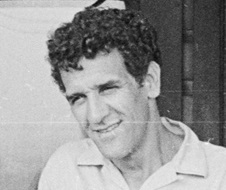 "Dr Charles Perkins AO is a significant Australian who dedicated his life to fighting for the equality and the civil rights of Aboriginal and Torres Strait Islander people," Mr Griffin said.

"This plaque recognises the tireless efforts of Dr Perkins in shining a light on the inequitable standards Aboriginal and Torres Strait Islander people faced in the community due to systemic racism and discrimination.

"This Blue Plaque celebrates Dr Charles Perkins' life of service as a champion of awareness, education and change, and his story exemplifies the values of the Blue Plaques program and the extraordinary people who helped shape New South Wales."

University of Sydney Vice-Chancellor and President Professor Mark Scott said the University is thrilled that the life and work of one of its most impactful alumni has been included in this important program.

"A civil rights activist who dedicated his life to achieving justice for Aboriginal and Torres Strait Islander people, Dr Perkins was the first Aboriginal man to graduate from the University of Sydney in 1966," Professor Scott said.

"We nominated our Charles Perkins Centre to celebrate his remarkable work, the important work of the Centre, and to promote his philosophy of collaboration, inclusivity and challenging the status quo."

It is one of several recently-installed Blue Plaques, which commemorate the historical figures that have left lasting legacies in New South Wales, including 3 of the program's 10 regional Blue Plaques from the first nomination round:

"Whilst our program is inspired by London's famous Blue Plaques program, a key point of difference is that in New South Wales, we're not just recognising the history of our biggest city, Sydney," Mr Griffin said.

"These 3 regional plaques installed over the last week celebrate individuals who played important roles in the development of our regional towns."

Another 2 Blue Plaques will be installed soon, recognising:

So far, 21 Blue Plaque recipients have been named, and the NSW public will be invited to nominate more noteworthy people, stories and events when a second round of nominations opens soon.

To learn more about the Blue Plaque recipients, and to see where the Plaques are installed, visit Blue Plaques NSW