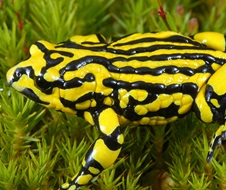 Environment Minister Matt Kean thanked the ADF for safely and promptly delivering the experts to remote enclosures where early inspections revealed that three of the four Corroboree frog sites were burned by the recent fires, with the fourth site still threatened by an active fire.

“The team of experts evaluated populations of the critically endangered Southern Corroboree frog affected by the fires and began efforts to ensure the surviving frogs had adequate refuge sites and food,” Mr Kean said.

“Unfortunately, there has been damage to the habitat inside the enclosures and also to the irrigation equipment, but luckily the fences surrounding them remained secure.

“Sadly, a number of the frogs perished and so all our efforts are now focused on protecting the remaining frogs by reinforcing moist habitat refuges in the enclosures and checking there’s enough food for the colourful but tiny amphibians.”

Mr Kean said that while this is a set-back for the conservation of Corroboree frogs in the wild, the species remains secure with captive populations continuing to do well at Taronga Zoo, Melbourne Zoo and Healesville Sanctuary.

The Corroboree frog recovery team will now work with NPWS to repair and provide more robust watering systems for all the field enclosures. The Southern Corroboree frog has been heavily affected by the amphibian chytrid fungus, which is responsible for major frog extinctions worldwide.

Brought back from the brink of extinction by the large-scale captive breeding program, wild populations have been re-established into disease-free fenced enclosures located throughout Kosciuszko National Park. Other amphibians which may be carrying the chytrid fungus are excluded.

Help save our threatened species