As part of an ongoing pest control program across the Southern Ranges Region, the National Parks and Wildlife Service (NPWS) is continuing aerial baiting for wild dogs and foxes during October. 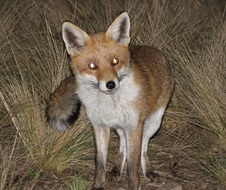 “The operation involves NPWS crews deploying 1080 baits from a helicopter into rugged and remote areas of the Southern Ranges,” Mr Pettitt said.

“More than 140km of aerial baits are expected to be laid across Kosciuszko National Park and neighbouring Yaouk and Scabby Range Nature Reserves.

“This aerial baiting will be carried out in conjunction with ground baiting, trapping and shooting programs to more effectively reduce wild dog and fox numbers and to protect neighbouring stock from the impact of predation by these pest species.

“This routine operation is part of a much broader wild dog and fox control program involving other land management agencies and private landholders.

“An integrated approach, involving multiple methods and agencies working together will be the most effective in managing this landscape-wide issue.

“Wild dogs and foxes are not confined to a particular area or land tenure, so together with neighbouring landholders and the Local Land Services we are coordinating our efforts,” Mr Pettitt said.

This program is part of the Southern Ranges Regional Pest Management Strategy and supports aerial baiting operations undertaken throughout May and June across Kosciuszko National Park and neighouring Reserves.