Thousands of kilograms of carrots and sweet potato are being delivered to endangered Brush-tailed Rock-wallabies in fire affected areas as the NSW Government steps in to help. 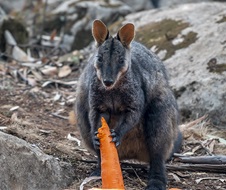 Environment Minister Matt Kean said the food drops are part of a major post-fire wildlife recovery effort being designed and delivered across the State.

"The provision of supplementary food is one of the key strategies we are deploying to promote the survival and recovery of endangered species like the Brush-tailed Rock-wallaby," Mr Kean said.

"Initial fire assessments indicate the habitat of several important Brush-tailed Rock-wallaby populations was burnt in the recent bushfires. The wallabies typically survive the fire itself, but are then left stranded with limited natural food as the fire takes out the vegetation around their rocky habitat.

"The wallabies were already under stress from the ongoing drought, making survival challenging for the wallabies without assistance."

In the last week almost 1000 kilograms of sweet potato and carrot have been sent to 6 different colonies in the Capertee and Wolgan valleys; 1000 kilograms across 5 sites in Yengo National Park; almost 100 kilograms of food and water in the Kangaroo Valley, with similar drops having also taken place in Jenolan, Oxley Wild Rivers and Curracubundi national parks.

Mr Kean said this is the most widespread food drop we have ever done for Brush-tailed Rock-wallabies and will help maintain these colonies and allow them to recover.

"At this stage, we expect to continue providing supplementary food to rock-wallaby populations until sufficient natural food resources and water become available again in the landscape, during post-fire recovery."

The provision of supplementary food will be accompanied by intensive feral predator control, as required.

"When we can, we are also setting up cameras to monitor the uptake of the food and the number and variety of animals there," Mr Kean said.