As part of the State of Emergency declared by the NSW Premier today in response to predicted catastrophic fire weather in the Illawarra and Shoalhaven, all national parks on the South Coast, including tracks, trails and campgrounds on the South Coast, will be closed from Tuesday 12 Nov 2019 until further notice. 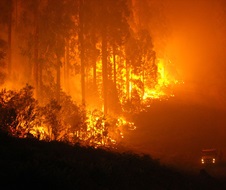 This follows the announcement of national park closures north of the Hawkesbury River and in the Greater Sydney area. National Parks and Wildlife Service (NPWS) South Coast Branch Director Kane Weeks said the decision effective for all parks along the NSW coast between Queensland and Victoria was essential to protect public safety.

“Fire can move extremely fast through the landscape with new ignitions possible so every precaution to protect people is necessary,” said Mr Weeks

“The closures include campgrounds in national parks on the South Coast, the closure of Visitor Centres at Minnamurra and Fitzroy Falls, and closure of popular walking tracks, including popular waking tracks in Morton National Park at Mount Bushwalker and Pigeon House Mountain Didthul walking track,” Mr Weeks said.

“Total closure” means no public access at all and includes tracks, trails, campgrounds and picnic areas. Parks will only reopen when considered safe.

All visitors to national parks are reminded that a Total Fire Ban has been declared and ALL forms of flame-based cooking and BBQ’s are not permitted. For details on what is permissible visit Rural Fire Service: Total Fire Ban rules.

Road closures are very likely so check with Live Traffic before travelling through any National Park and generally avoid driving in any bushland.

Mr Weeks said NPWS is a key support agency for bushfire response and has more than 1,000 trained firefighters which it deploys to wildfires and hazard reduction throughout the year, including supporting RFS and NSW Fire and Rescue.