A new population of the critically endangered Glasshouse Banksia has been discovered in Coorabakh National Park, north-east of Taree. 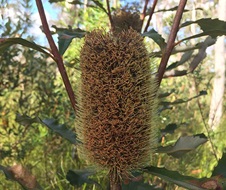 Office of Environment and Heritage (OEH) Data Support Officer, Andrew Steed said the discovery was made while conducting soil sampling and plant monitoring in the area, as part of the conservation work being funded by the NSW Government's Saving our Species program.

"We were extremely surprised and excited to find the Glasshouse Banksia in a remote and mountainous area in Coorabakh National Park, as this plant usually prefers a different type of soil and geology," Andrew said.

"The Glasshouse Banksia was previously only known to live in a small area within this park as well as the Glass House Mountains in Queensland - so this new population is great news for this rare plant.

"We haven't counted the exact number of plants in this population as yet but we think it could be in the thousands, which is why we will go back later in the year."

"This trip was very encouraging as finding more plant populations fills us with hope of being able to secure these endangered or vulnerable plants in the wild into the future," Mr Steed said.

"And we can't wait to get back to Coorabakh National Park for further monitoring - who knows what else we could find," he said.

The Glasshouse Banksia is an interesting looking shrub growing to four metres in height. Branchlets can vary in colour from orange to red or brown and its individual flowers are yellowish-green to pinkish-brown in bud and golden when open.