Meet Jess Peterie, a Threatened Species Officer working on the recovery of the threatened purple copper butterfly on the Central Tablelands of NSW. 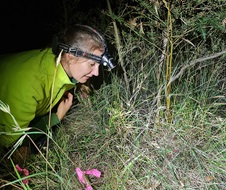 The purple copper butterfly is a small copper-coloured butterfly, endemic to the Central Tablelands of New South Wales and found nowhere else in the world. Jess explains why this species is so special and reports on the conservation work being done to support it.

A tale of the plant, the ant and the butterfly

The purple copper butterfly has a fascinating life history. Butterflies emerge from pupation between September and October and fly for approximately 2 weeks. During this time the butterfly lays its eggs on a very specific shrub, the native blackthorn (Bursaria spinosa subsp. lasiophylla); once hatched the caterpillars feed exclusively on this shrub.

An ant species, referred to as the ‘attendant ant’, forms a mutualistic relationship with the caterpillar. The ants protect the caterpillar from predators, escorting them up the native blackthorn shrub at night to feed and sheltering them within their underground nest when not feeding. In return, the ants receive a sugary substance called ‘honeydew’, secreted from a gland on the caterpillar’s back. Pupation also takes place in the ants’ nest until late August, when the butterflies emerge and the cycle begins again.

Habitat loss is a critical threat to the species with clearing of native blackthorn having devastating impacts on populations. Not only is there an immediate loss of habitat, but populations become more isolated, which limits genetic exchange between them.

Competition from invasive weeds such as blackberry and broom can be detrimental to the butterfly as they compete with native blackthorn and crowd butterfly habitat, reducing the availability of sunning spots for adults in the flying season. Control of these weeds is an important part of the current Saving our Species (SOS) conservation project. 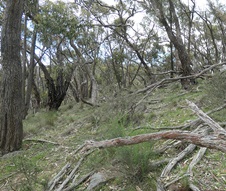 Feral pigs have been found to destroy core habitat at some sites with pigs uprooting entire native blackthorn plants, often resulting in the death of the plant. Importantly, this also destroys the ants’ nest where pupation takes place. The ongoing NSW National Parks and Wildlife Service (NPWS) pig control program is helping to address this threat.

An annual field day in conjunction with Central Tablelands Local Land Services (LLS) is helping to raise community awareness of the purple copper butterfly and the conservation project.

During the 2019/2020 bushfires, many known locations of the purple copper butterfly within the Lithgow foothills were affected by fire, and there was particular concern that the timing of the fire may have affected caterpillars, which were still active at the time.

However, post-fire assessments undertaken in May 2020 to assess fire impact and the recovery of the native blackthorn, found that plants were re-sprouting profusely at all sites. There was new growth up to 50cm in height, in less than 5 months since fire. Further, some sites were found to have small patches of unburnt habitat.

Thanks to community sightings and survey effort during September, the butterfly was found to be flying in some recently burnt locations. This is promising news for the recovery of this threatened species.

Following 3 years of detailed annual butterfly monitoring at three management sites, the species appears to be stable at each site, in spite of the threats to its survival. 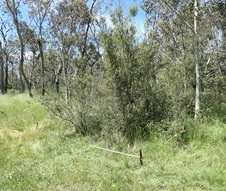 The Friends with Benefits: supporting the post-fire recovery of mutualistic insects project has commenced and aims to deliver ecosystem restoration activities at fire affected sites around Lithgow.

The project is managed by Central Tablelands LLS, in partnership with the Lithgow and Oberon Landcare Association, Lithgow City Council and supported by the Saving our Species program. The project is funded by the Australian Government’s Wildlife and Habitat Bushfire Recovery Program.

Low intensity prescribed burns undertaken at the appropriate time can be a powerful habitat management tool to promote re-sprouting of young, palatable and lichen free plants. One management site within the SoS project has been long unburnt with senescent native blackthorn present. It is hoped that a prescribed burn planned for autumn 2021 across 10 plots will increase the availability of suitable habitat for the caterpillar. Ongoing monitoring will assess the overall effect of the burn on the butterfly population.

Raising awareness of the purple copper butterfly and its habitat is vitally important for its ongoing conservation .

You can be on the lookout for this beautiful butterfly in appropriate habitat in spring. The upper sides of the butterfly display a beautiful purple, blue and green iridescence when sunning.

Landholders can protect existing native vegetation and plant new native species in your gardens and on your properties. Native blackthorn can be found in nurseries in the Central Tablelands area.

To contact Saving our Species with any information or queries about the purple copper butterfly, please email savingourspecies@environment.nsw.gov.au.