Ancestors return to the Hunter

The repatriation and reburial of 16 sets of Aboriginal Ancestors' remains in the Hunter Valley region has been completed. 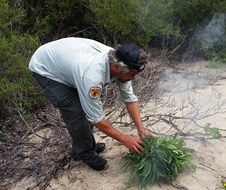 Office of Environment and Heritage (OEH) spokesperson John Duggan said that over the last 6 months, OEH has been working with 3 Local Aboriginal Land Councils (LALCs) in the Hunter Valley to re-bury the Ancestors in 4 relevant locations including Broughton Island, Dark Point, Fingal Bay and Singleton.

Wanarauh LALC undertook the final burial last week, where 9 sets of the remains were interred on Country in Wanaruah Park, Singleton. Over 100 people came to pay their respects during the reburial.

Mr Duggan said: "The first lot of Ancestors were returned to Broughton Island in August 2018. Since then we have been working with Local Aboriginal Land Councils, National Parks and Wildlife Service (NPWS), local councils and museums to secure the release of all the Hunter Valley Ancestors".

Most of the Ancestors came from The Sydney University and the Australian Museum. One set of remains came from the Tea Gardens Police Station. The Aboriginal Community and OEH took custody of the Ancestors from the institutions and stored the remains on Country for a short period of time before the reburials took place.

The remains were not radio carbon dated, but some have been in these museums for over 100 years. The Ancestors included male and female individuals, both adults and children.

Smoking ceremonies were performed for the burials, and all Ancestors were wrapped and tied in paperbark bundles before reburial. Community members sourced and cut the paperbark, and individually wrapped each Ancestor.

LALC representatives and community members described the ceremonies as overwhelming and exhilarating, whilst others compared their experience as similar to attending an ANZAC Ceremony at Villers-Bretonneux in the Somme - the feeling being very sombre.

The Ancestors are now at peace, resting within their traditional lands.