When a Department of Planning Industry and Environment employee found a recently deceased squirrel glider at his home just outside Armidale, he turned tragedy into educational opportunity. 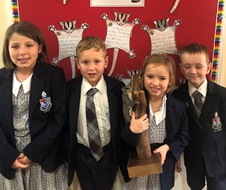 He took the rare find to the National Parks and Wildlife Service Save our Species project team, which facilitated the glider’s preservation – and last month the mounted glider helped teach some unforgettable lessons at New England Girls School (NEGS) Junior School Armidale.

A delighted Kindergarten class voted to name him ‘Zarly’, and the mounted glider became a focal point to learn about this vulnerable species.

“It was a perfect fit and cut to the heart of the work NPWS SoS does,” Adam Fawcett NPWS said.

“We are educating people about these rare and special gliders, while NEGS was preparing a teaching unit on native fauna. The class did several activities learning about Squirrel Gliders, their habitat and their value,” Adam said.

“The class named the little glider Zarly – after great discussion which ended in a vote,” she said.

“They worked on activities and learnt interesting facts about this local native marsupial. Overall, they thoroughly enjoyed Zarly’s visit and now appreciate its special skills, behaviour and needs.”

After being found, the Squirrel Glider’s body was given to the NPWS Saving our Species (SoS) Project Team in Armidale. NPWS’ SoS program helps secure threatened plants and animals in the wild in NSW.

To help teach staff and the public about these special marsupials, the SoS team used taxidermy to preserve and mount Zarly on a small branch for educational perpetuity.

Zarly has a scientific name of Petaurus norfolcensis and is looking to complete more educational assignments. He is on display within the NPWS office at Faulkner St, Armidale.

“Zarly’s species is widely – although sparsely – distributed in eastern Australia, and was a rare find for the New England area,” Mr Fawcett said.