A good turnout is expected to celebrate the 50th anniversary of the Bald Rock National Park near Tenterfield on 3 July. 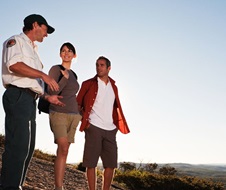 The National Parks and Wildlife Service (NPWS) is inviting the local community to help celebrate the anniversary and enjoy guided ranger walks promoting the history, wildlife and plants of the Bald Rock National Park.

"The NSW-Queensland border actually runs across the rock's the western side and it's got spectacular views of the border ranges from the summit, Mr Smith said.

On the other side of the border is the Girraween National Park in Queensland.

"Just off the main road from Tenterfield to the park is Thunderbolt's Hideout, a set of caves and overhanging granite rocks thought to have been used by bushranger Captain Thunderbolt."

One walk will follow Bungoona walking track at the base of Bald Rock, while the other will tackle the steep walk to the Bald Rock summit, later returning to the Bald Rock picnic area for a light afternoon tea and cutting of a special anniversary cake and billy tea.

Although the park was heavily affected by recent bushfires, recovery is well underway.

Walkers will often see kangaroos, red-neck and swamp wallabies as well as a large range of woodland birds.

In spring the heathland wildflowers attract a lot of visitors to the park.

To register your attendance call 02 6736 4298 or email npws.ntab@environment.nsw.gov.au