The Quollidor Saving our Species project aims to improve the resilience and size of the Barren Grounds-Budderoo spotted-tailed quoll population. 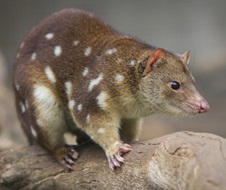 The spotted-tailed quoll is the Australian mainland’s largest carnivorous marsupial and is listed as a threatened species.

Spotted-tailed quolls compete for food and are killed by introduced predators such as foxes. They are also threatened by habitat loss and damage.

The ‘Quollidor’ is the name given to the connected vegetation corridor that links the quoll’s habitat from the South Coast escarpment forests, to the Metropolitan Special Area water catchments across to the southern Blue Mountains.

Infra-red camera surveys have revealed that quolls are still present in the Barren Grounds Nature Reserve and Budderoo National Park. Because quolls have huge home ranges, from 300 to 3000 hectares, we know they will be moving from these reserves onto the private land surrounding the Quollidor.

The Quollidor Project has been established under the NSW Saving our Species program to improve the monitoring of quolls in the Barren Grounds-Budderoo region.

To help quolls survive in this region we need to:

How land managers can help

If your property is near the Barren Grounds – Budderoo reserves:

Our Quollidor partners have established a network of infra-red cameras in important spotted-tailed quoll habitat. Each quoll has a unique spot pattern, so the cameras can identify individuals and tell us about population size, seasonal activity and their home ranges.

The Quollidor project is supporting private land managers to reduce fox numbers in these areas and increase the core area of enhanced Quollidor habitat.

We are inviting and supporting private land managers in these areas to join in a coordinated fox control program.

We are also planning to hold free BioBlitz flora and fauna surveys to help find out which species live on their land.

Fox control is already every land manager’s responsibility. For effective fox control we need to all cooperate, working at the same time over as large an area as possible and using a variety of control methods.

Ground baiting with 1080 poisoned baits is the most effective way to control foxes.  Coordinated group baiting on private land twice a year—in autumn and spring—increases the exposure of fox populations to baits and supports year-round fox baiting in national parks. Your pets will be safe during the brief baiting periods if they are kept away from baited areas.

Recent studies of more than 100 quolls in southern Kosciuzsko National Park, the Northern Tablelands and in south-east Queensland have all shown that ground-based and aerial 1080 baiting programs don’t affect quoll populations.

Up to half of the tracked quolls found and ate the poisoned baits, but only one quoll death was linked to the bait and that finding was uncertain. These results give us confidence that the risk of bait exposure to quolls is extremely low.

Read more about the recent 1080 studies.

Fauna and flora surveys were conducted in the Upper Brogers Creek catchment as part of a survey to assess the biodiversity of the area.