Despite the wettest January in almost 30 years, 83 per cent of NSW’s swimming sites were graded as Good or Very Good in the annual State of the Beaches report, NSW Environment Minister Mark Speakman said today. 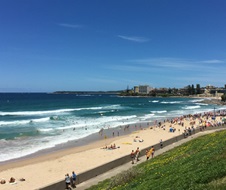 Of monitored ocean swimming sites, 97 per cent were graded as Good or Very Good.

“The report has delivered good news again for beachgoers across NSW, with our state’s beaches remaining some of the cleanest in world,” Mr Speakman said.

Mr Speakman said the results were again encouraging for the Newcastle, Illawarra and South Coast regions with all beaches graded Very Good or Good. Heavy rainfall and major storm events had impacted the results of a number of estuaries, lagoons and lake swimming sites.

“Heavy rainfall in November and December meant stormwater was a major cause of pollution to recreational waters,” Mr Speakman said.

“Wet conditions continued in January, which was the wettest for Sydney since 1988, with several severe thunderstorms causing heavy rain and localised flooding which resulted in stormwater and wastewater affecting many swimming sites.”

Sydney Water and the Hunter Water Corporation, in addition to affected local councils, will continue to work together to continue to improve the cleanliness of the state’s swimming sites, with initiatives including wastewater systems upgrades, upgrades of sewerage infrastructure and the installation of gross pollutant traps.

The Summary provides an overview of the results for ocean beaches, estuarine beaches, coastal lakes and lagoons and ocean baths, information on how to read this report and quality assurance.