The 2014-15 Beachwatch scorecard has rated 96 per cent of the state’s ocean beaches as good or very good, which makes NSW ocean beaches among some of the cleanest in Australia. 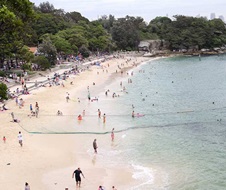 The Office of Environment and Heritage’s report provides ratings for 139 ocean beaches as well as estuarine beaches, lake and lagoon sites and ocean baths across NSW.

'Despite above average rainfall over the past year, which affects water quality, 83 per cent of NSW swimming sites were graded as good or very good, which is the same as the previous year,' Mr Speakman said.

All but one of Sydney’s ocean beaches (Boat Harbour on the Kurnell peninsula) were graded good or very good, in this year’s report.

There were also strong results for the South Coast, Illawarra, Hunter and North Coast regions – all ocean beaches were graded very good or good.

Water quality has improved at Illawarra’s Entrance Lagoon Beach. It was upgraded to good from last year’s poor rating as a result of the council’s stormwater management programs.

Heavy rainfall, damaging winds and major flooding in April caused stormwater and wastewater to affect some swimming sites. Gosford’s Avoca and Copacabana beaches’ ratings, which were lower than last year, were partly attributed to this rainfall