The NSW Government announced recently that about $400,000 would go towards a regionally-based conservation project to help save the threatened superb parrot.

The project will protect and restore superb parrot habitat on private land, national parks and reserves by protecting and re-planting paddock trees and improving habitat quality with shrub species including wattles that provide important food resources for this beautiful parrot. Find out more about the project.

At 1500 hectares, the Dananbilla Nature Reserve site is the single largest box-gum woodland patch in the national reserve system in Australia. As one of six identified sites in the Young district, the Dananbilla is home to over 20 threatened and other native species, including the superb parrot, turquoise parrot, hooded robin, squirrel glider, eastern spotted quoll and the Vulnerable pink-tailed worm lizard.

‘We’re in it for the long haul,’ Susie Jackson said. ‘The progress over the past 20 years has been slow but the outcomes are so promising. Even if it turns out to be a 50-year project it is worth it to make sure that we restore as much of these beautiful woodlands as possible.

‘There is so much important connectivity between the trees, grasses and animals in these woodlands.’ 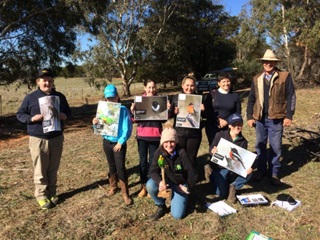 Senior Saving our Species Officer Damon Oliver shared his passion for threatened woodland birds with Year 6 from Boorowa's St Joseph's School on an annual visit, this time arranging for some of them to spend time with inspirational landholder David Marsh (pictured) who has restored his farm from 3% total native vegetation cover in 1966 to over 20%. There have been 128 bird species recorded on his property in the last 20 years, including many threatened species!

Contestable Grants for TECs and Landscape-managed species throughout New South Wales are now open through the NSW Environmental Trust.