Bellinger Riverwatch kicks off its Macroinvertebrate Testing Program today after the Department of Planning Industry and Environment handed across $60,000 in funding from the Australian Government's Bushfire Recovery Program for wildlife and their habitat. 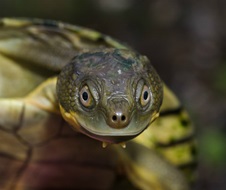 "We're delighted this funding will support Bellinger Riverwatch to monitor the health of the water and its smaller inhabitants – including macroinvertebrates such as water beetles and waterbugs," Mr Cain said.

Waterbugs are a great indicator of what's happening with the water quality and aquatic habitat in the river and having citizens involved in the waterbug monitoring will add a new dimension to local knowledge, according to Adrian Dickson, Senior Scientist, Department of Planning, Industry and Environment.

"Bellingen Riverwatch is taking citizen science forward and by working together with government, consultants and researchers, is ensuring the data collected is accurate, informative, timely and valuable for informing holistic management of waterways and the species they support," Mr Dickson said.

The data will shed light on the turtles' habitat and may inform management decisions around the Bellinger River Snapping Turtle Conservation Program, according to NSW Government Saving our Species officer Gerry McGilvray.

"We know that a healthy waterway is important for ecosystem function and the turtle," Ms McGilvray said.

The Bellinger River snapping turtle is one of Australia's rarest turtles. It suffered a mass mortality event in 2015 when a virus struck, reducing its population of around 4500 to less than 150. The bushfires of 2019ndash;20 further impacted its habitat.

Macroinvertebrates are small invertebrates that live in fresh water and are particularly sensitive to water quality so the type and diversity found reveal how healthy a waterway is. The project will test six sites on the waterways at 6-month intervals, starting this Thursday.

The project will inform the riparian restoration work that Local Land Services will deliver – also through the Australian Government's Bushfire Recovery Program for wildlife and their habitat.

"Taronga Zoo's longstanding captive breeding program has been releasing turtles bred in captivity back into the Bellinger River, and we've had 3 releases with a total of 52 turtles going back to the river," Ms McGilvray said.

The conservation effort involves the support of landholders, community members and researchers involved in the project.