Ben Boyd National Park on NSW's far south coast will be renamed in the language of Traditional Custodians recognising the Aboriginal cultural heritage of the area. 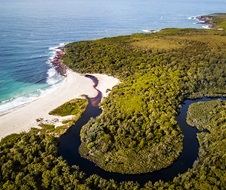 Environment Minister Matt Kean said the decision follows requests from Aboriginal communities to rename the park due to Ben Boyd's association with 'blackbirding', a practice that involved the coercion of people through deception or kidnapping to work as slaves or poorly paid labourers.

"It is time to acknowledge the real history of Ben Boyd and remove his name from the national park that continues to hold enormous cultural significance for Aboriginal people," Mr Kean said.

"It is clear from the expert historical analysis, that Ben Boyd's association with 'blackbirding' should not be reflected or celebrated in any way in our national parks."

"There are many people from NSW's early history who are worth remembering and celebrating but it is clear from this historical analysis that Ben Boyd is not one of them."

"By renaming the park, we not only celebrate ancient Aboriginal culture but also recognise its importance to Aboriginal people in recent history."

The next step is to work with Elders and Aboriginal community representatives to identify a new name for the park. Consultation on a new name is expected to start in the coming weeks.

Last year National Parks and Wildlife Service responded to calls to rename Ben Boyd National Park by engaging an independent historian, Dr Mark Dunn, to provide a report on the history of Ben Boyd on the NSW South Coast.

Dr Dunn's report confirms Ben Boyd's involvement in 'blackbirding', was viewed by many at the time as a form of slavery. Renaming the park follows the NPWS Parks Name Policy where new park names should come from Aboriginal communities.

More information can be found on the Renaming of Ben Boyd National Park and Benjamin Boyd’s role in Blackbirding.