The state’s biggest movers and shakers in environmental excellence, leadership and innovation were recognised last night at the 2016 Green Globe Awards at the Art Gallery of NSW. 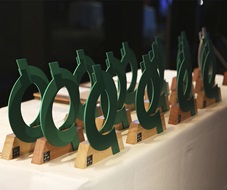 “This year’s prestigious Premier’s Award went to the Bower Reuse and Repair Centre, a non-profit reuse and repair centre which has collaborated with local councils to provide a rehoming service for furniture and other goods,” Mr Speakman said.

“In 2015/16 this service diverted 139 tonnes of material from entering landfill.”

“This interactive website targets our pre-schools and empowers children to do little things that have a big impact,” he said.

“Through the powerful tool of storytelling children learn how to maintain worm farms, grow their own vegetables and be energy and water wise.”

“Charles Sturt University is the first university in Australia to achieve carbon neutral status – a 32 per cent reduction in emissions from 2011 to 2015. Jaliigirr Biodiversity Alliance is a network of organisations working to establish wildlife corridors in the Bellinger River catchment,” Mr Speakman said.

An independent panel of environmental experts helped select this year’s winners. The awards have been running for 17 years. For a full list of winners and entry forms for next year, visit Green Globes