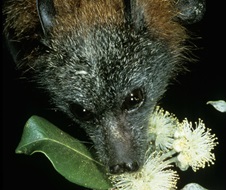 The State’s premier fruit growing regions across the Central West, South West and North Coast, in addition to the Sydney Basin, will now be better protected from flying-fox damage.

Mr Blair said that across the Sydney Basin’s fruit growing region, the flying-fox nets had been a great success.

“Already in regions, like Bilpin to the west of Sydney, farmers have taken advantage of this practical and affordable program since last year to keep flying-foxes away from crops.

“This program will now be rolled out across the entire state,” Mr Blair said.

“The state’s cider industry is expected to grow by 20 per cent over the next five years. I am proud the NSW Government is working hand in hand with farmers to find new and innovative ways to reduce the impacts of flying-foxes on the State’s orchards.”

Mr Speakman said that the additional funding builds on the previous commitment of $5 million announced for both throw-over netting as well as fully secured netting.

“This solution therefore balances the critical ecological need to protect a native species with the needs of primary industry.

”This program is available across the whole of NSW and meets half the cost of installing netting for eligible properties, capped at $20,000 per hectare.”

The program will assist commercial orchardists to mitigate flying-fox damage and eliminate the need to issue shooting licenses.by installing new exclusion netting including throw over netting and infrastructure upgrades to bring existing non-compliant netting up to standard.

The announcement of additional funding delivers on a key part of the NSW Liberals and Nationals Government’s Memorandum of Understanding with NSW Farmers to continue to support the flying-fox netting program.

Meet the southern ningaui, a tiny but ferocious desert preda...