The NSW Government is massively expanding the NSW national park estate with the purchase of two properties, Avenel/Mount Westwood station near Broken Hill and Koonaburra station near Ivanhoe, which will add a combined 166,924 hectares. 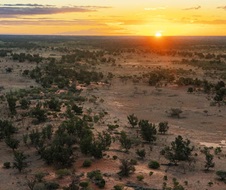 Environment Minister, Matt Kean said these 2 purchases take the total additions to the national park estate to 520,000 hectares since August 2019.

"In just over 2 years we have added over half a million hectares to our park estate, smashing target after target and securing precious habitat and biodiversity for future generations," Mr Kean said.

"This latest expansion will conserve significant areas of critically important habitat types in western NSW that are not currently protected in the park estate."

Both properties are significant in size, with the 121,390 hectare Avenel/Mount Westwood Station the second largest purchase by NPWS in the state's history.

Avenel/Mount Westwood Station, a remote and ecologically diverse landscape on the South Australian border, features spectacular dune fields of the Strzelecki desert transitioning to the rocky plateau of the Barrier Range, with a network of river red gum and coolabah fringed rivers, creeks and watercourses. The property also supports habitat for an estimated 30 threatened plant and animal species including the Australian bustard and the dusky hopping mouse.

Koonaburra station, will add a further 45,534 hectares including an extensive area of sandplain and dune field country featuring a vast network of water depressions ("melon holes") providing important water sources for many species. It also supports habitat for at least 20 threatened animal species including the Major Mitchell cockatoo, Mallee fowl and the fat-tailed dunnart.

NPWS is currently delivering the biggest investment in visitor infrastructure in national park history and this program will be extended to both Avenel and Koonaburra, ensuring both properties become "must see destinations" for the millions who visit our national parks every year.

In a flap to put NSW birds on the map