At least 43 little tern fledglings were observed at Shoalhaven Heads this season, the highest number seen at the site since records began 20 years ago. 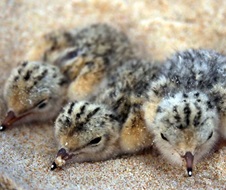 Annemarie Mueller, Shorebird Ranger with the National Parks and Wildlife Service (NPWS) said this is more than 3 times the number of fledglings ever recorded in the area.

'Not only did we see a record number of fledglings, but we also had more breeding pairs than ever recorded which kept local volunteers very busy,' Ms Mueller said.

'The data from this season shows us that Shoalhaven Heads hosted around 10% of the entire little tern breeding population in New South Wales.

'We can't be sure why so many little terns picked Shoalhaven Heads for their annual trip back to New South Wales, but we are sure that the volunteers contributed to such a successful season.

'Close to 100 local volunteers were out in all conditions right along the coast, from Gerroa to Eden, protecting nests, eggs, chicks and talking to beach goers and dog walkers.

'Committing more than 5700 hours of monitoring, we are very thankful for their dedication to these migratory birds, listed as endangered in New South Wales.

'The volunteers are all locals and know their beach better than anyone else, so their contribution each year is invaluable.

'Often they teach me more than I can teach them as they have such as long association with their local beach and such a detailed history of beach nesting bird sightings.

'These are beautiful birds and when properly protected they do an amazing job of raising their young, the next generation of these threatened species.

'Thanks also must go to local Council rangers from Kiama, Shoalhaven, Eurobodalla and Bega who also supported the breeding season by assisting with beach compliance of dogs and vehicles,' Ms Mueller said.

Little terns are now migrating north into east Asia and will return to NSW beaches from September this year. NPWS together with the NSW Government's Saving our Species program, has strategies in place to help secure a future for our threatened beach-nesting bird.

To find out more visit Beach-nesting birds: Share the shore.