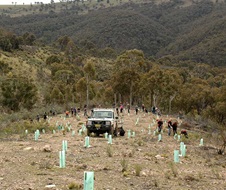 A 'working bee' of over 60 Four Wheel Drive Club volunteers descended on the Retreat River, in Abercrombie River State Conservation Area to plant 400 trees and shrubs along the river banks and previously cleared slopes.

"The 4WD Clubs have made a valuable contribution to not only restoring the natural environment, but assisting in the habitat restoration for the endangered Booroolong Frog and Macquarie Perch.

"The planting day saw the completion of the 'Riparian Rehabilitation Partnership Project' between NPWS and Central Tablelands Local Land Services.

"The project has also seen the control of willows and blackberries over 50 kilometres of river banks by NPWS staff and contractors," Mr de Govrik said.

Kanangra Area Ranger Jules Bros said the 'Wombeyan Weed Whacking Weekends' have been occurring twice yearly since 2011 and have clocked up over 4300 volunteer hours and hand treated over 20 hectares of woody weed invasion.

"The weekends are a great way for volunteers of all ages to help restore our native bush but at the same time, socialise with like-minded people," she said.

On the weekends, volunteers are trained in the skills of bush regeneration using drills, saws, secateurs and weed killer. Professional bush regenerators and NPWS Officers, are always at hand to assist with control technique and plant identification.

"It's amazing what can be achieved with an enthusiastic group, working together as a team to remove these invasive woody weeds such as cotoneaster and firethorn.

"Hand weeding is the only possible way to control these shrubs that have taken hold up on the edges of the limestone valley. Underneath these exotics are often tiny native plants, some are threatened species, just waiting for the opportunity to take over the bush again," Jules said.

Volunteers are 'repaid' for their efforts with accommodation, meals and a cave tour on the weekend.

For more information on these volunteer projects contact the Oberon NPWS Office on 6336 1972 or email jules.bros@environment.nsw.gov.au