Here’s some water cooler gossip that even a lone koala won’t resist! 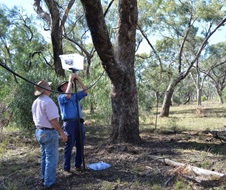 Six new improved 'Blinky Drinkers' were set up in December to give Gunnedah’s threatened koalas a hand with hydration.

The latest ‘Blinky Drinkers’, named after the popular koala character ‘Blinky Bill’, have been funded by Saving our Species through a collaboration with University of Sydney, local landholders and a landcare group.

The koala is one of six iconic threatened species under the NSW  Saving our Species (SoS) program. The Southern Corroboree Frog, the Malleefowl, the Wollemi Pine, Brush-tailed Rock-wallaby and the Plains Wanderer are also recognised as iconic.

The new koala water stations are each capable of holding up to 200 litres and include infra-red night vision cameras.

David Walker, Principal SoS Project Officer, Office of Environment and Heritage, said the newly-designed water stations were funded by a $38,000 grant from the SoS program.

'The University of Sydney also developed a better monitoring system with antennae installed over the drinking bowls – these will identify individual koalas’ microchips and the cameras will capture night visitors,' he said.

Dr Valentina Mella, Animal behaviour researcher, University of Sydney has been researching the hydration needs and behaviour of the Gunnedah koalas since 2015 alongside Mr Frend.

'Our study has shown that whilst more koalas visited the drinkers during the hot months, they still used the drinkers extensively in cool months too, often drinking for up to 10 minutes at a time,' said Dr Mella.

'The main reason the koalas need extra hydration is due to heatwaves and droughts which change the moisture content of the koala’s eucalypt leaf diet.

'We know koalas are quite explorative by nature; what we are hoping to look at next is whether they will travel specifically to find water,' said Dr Mella.

Sam Clift and Kate Wilson, owners of the property where the new Blinky Drinkers are installed, have often seen koalas seek shelter and water close to home.

'We are hopeful that the new Blinky Drinkers will help retain and even increase the population of the 40 koalas or more that have already been microchipped at the property since 2015,' said Kate

But the cameras are showing it’s not only koalas enjoying the thirst quench. Dr Mella said so far the cameras had caught not just koalas, but also other wildlife using the watering point.

'The drinkers are used by a variety of species and as such they have the potential to help many different native animals during heatwaves and droughts.

'In the videos, we can see a Sulphur Crested Cockatoo, a Feathertail Glider, a Rosella, a Brushtail Possum, two Kestrels and pleasingly a koala all appreciating the drinker,' she said.

It’s not only the koalas who are enjoying the drinkers…see the thirsty visitors at ‘The Dip’.

COVID 19 forces temporary closure of roads and day visitor a...

Wild weather forces the temporary closure of beach driving a...