The future of the iconic bilby in NSW is looking brighter with the population more than doubling at Mallee Cliffs National Park since they were reintroduced in December 2019. 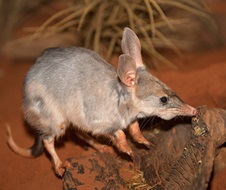 Environment Minister Matt Kean said the booming population shows how successful feral-free safe havens are in protecting species and allowing them to thrive.

"It is estimated that feral cats alone kill more than 1.5 billion native animals every year and small to medium-sized mammals are especially vulnerable, so we need projects like these to remove threats and give our native species a fighting chance."

There are a further 4 feral-free areas across New South Wales in the planning stages that will eventually see more than 65,000 hectares declared feral cat and fox free in New South Wales.

This is one part of the NSW Government's commitment to protecting our iconic native species from extinction and represents one of the largest species reintroduction programs anywhere in the world.

More information on the work conducted at Mallee Cliffs National Park is available.

Use the Wildlife Management System to renew your licence for...

Spring swooping season will soon be over

Use the Wildlife Management System renew your licence for 20...

One Mile and Samurai Beach re-open following removal of whal...