Bioblitz - biodiversity on the ground

The 2017 Wombeyan Caves Bioblitz weekend in November proved how positive and effective a combined effort by conservation players can be for the protection of a habitat and its species. 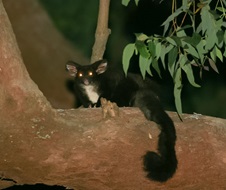 Several Saving our Species (SoS) and National Parks and Wildlife Service (NPWS) staff and conservation colleagues including the National Parks Association (NPA NSW) and Australian Museum joined Glideways and over 100 volunteers for the Bioblitz weekend.

Community organisation Glideways aims to protect native gliders in the Abercrombie Catchment and SoS’s Senior Threatened Species Officer Anna Murphy described them as ‘impressive’ and the Bioblitz itself ‘as a unique forum to raise awareness of our native biodiversity’.

They were thrilled to see a Greater Glider using a recently installed nest box and a quoll caught on camera, and recorded 37 species of birds over the weekend.

‘It was an amazing opportunity for people to learn about scientific methodology and ecological processes through hands-on participation,’ Anna Murphy said.

‘Orchid expert extraordinaire Alan Stephenson helped with the orchid survey and there were talks and stalls including the Taronga Mobile Zoo.’

The weekend activity helped hone the community’s survey skills and all the data is being uploaded to the BioNet atlas.

From the photographs, it is clear to see that an enjoyable and interesting weekend was had by all. Well done NPWS Blue Mountains and Glideways on making this fantastic event happen!

A summer of Discovery