Annual bitou bush control along the Great Lakes coast is progressing well with conditions allowing more than half of the program to be completed in the past week. 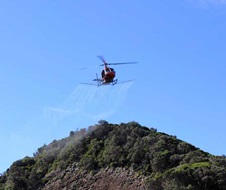 "This program is part of a larger integrated strategy to control bitou bush in coastal areas, including the internationally important Ramsar wetlands of the Myall Lakes," Mr Smith said.

"Native plant recovery in these areas has been very successful following bitou control with many areas before treatment having bitou bush density greater than 50% have now been reduced to less than 10% and in some areas less than 1%," Mr Smith said.

"Threatened species and Endangered Ecological Communities in the Great Lakes directly benefit from effective control of this weed.

"NPWS and MidCoast Council have been working collaboratively treating coastal reserves in the Great Lakes for the past 8 years. The technique is also used in other areas along the NSW coast.

"By far the most cost effective technique for treating bitou bush aerial spraying is extremely useful and effective in treating remote and inaccessible areas along more than 60 kilometres of coastline.

"If we had to rely on other techniques containment of the weed would be impossible.

"The technique applies large spray droplets at low levels close to vegetation to avoid any spray drift. The operation is carried out in accordance with Best Practice Guidelines for Aerial Spraying of Bitou Bush in NSW, and complies with off - label herbicide permit conditions.

"Jointly funded by the NPWS, the Hunter-Central Rivers Catchment Management Authority Partnership Program, and the Federal Government's Caring for our Country Fund, the program has seen a remarkable reduction of bitou bush over the past 8 years.

"Access is temporarily restricted in areas whilst the helicopter work is being undertaken for public safety. This includes some camping areas and section of 4wd beaches," said Mr Smith.

Depending on weather conditions, the program may continue until 31 July before all areas are treated.

Bitou Bush was introduced from South Africa, and infests up to 90% of NSW's coastline areas. It was first recorded in the 1890s but did not become a major problem until it was used in revegetation works following sand mining in the 1950s and 1960s.

This weed is listed as one of the 20 Weeds of National Significance, and is a declared Noxious Weed and a key threatening process under the Threatened Species Conservation Act NSW.

Control programs for bitou bush use a number of different techniques from hand removal, ground based spraying and aerial spraying, to reduce the density of the plant, and allows natives plants to recover and recolonise areas.