13 koalas that were evacuated from the path of an oncoming bushfire have been returned to Kanangra-Boyd National Park… and number 13 was a lovely surprise! 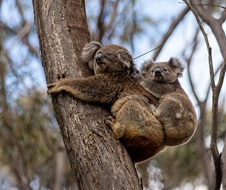 As bushfires tore through many parts of NSW, Dr Kellie Leigh - Executive Director of Science for Wildlife, saw an urgent need to rescue a highly significant koala population from the path of a mega-fire in the Blue Mountains. Dr Leigh and her team managed to capture 12 koalas as the fire approached. They were taken to Taronga Zoo, where they were safely housed for the remainder of the summer.

Just before their release back to the wild from Taronga, the research team were met with a pleasant surprise; it was discovered that one of the koalas, ‘Kali’, had a joey in her pouch.

In late March, after intensive surveys to see if the bush had recovered enough to support the koalas, Science for Wildlife coordinated the successful release of all 13 koalas back to their home in the eucalypt forests of Kanangra-Boyd National Park.

Science for Wildlife, a not-for-profit conservation organisation dedicated to bridging the gap between research and on-ground wildlife conservation, carried out the rescue and release. This amazing rescue was carried out in partnership with San Diego Zoo Global and Taronga Zoo, and with the permission and support of the NSW National Parks and Wildlife Service.

Where did the koalas go?

The koalas were part of an ongoing study, the Blue Mountains Koala Project, and with the support of Saving our Species this project had been uncovering hidden koala colonies across the Blue Mountains region. On release, the koalas were fitted with tracking collars. Ecologists can track them to understand their movements through the post-fire landscape, find out more about which trees and habitats they prefer, and understand the threats they face.

Why are these koalas important?

Koalas are a vulnerable but iconic species, with the Blue Mountains population sadly losing 80% of their UNESCO World Heritage habitat during the 2019-20 bushfires. As part of a collaborative study, Science for Wildlife discovered that the Blue Mountains koalas are the most genetically diverse in the world, so their conservation is essential for the survival of the species.

Back to Bungles Bird Week 2019

Back to Bungles Bird Week

Macquarie Marshes: making decisions with water for the envir...