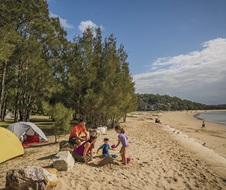 NSW Environment Minister James Griffin said the $2.5 million project at the world’s second oldest national park – Royal – will ensure it remains one of Sydney’s favourite parks for generations to come.

'I’m pleased to see this popular camping site reopen after major remediation works and upgrades, and for more people to be able to enjoy our natural environment,' Minister Griffin said.

Bonnie Vale is the gateway to southern Sydney’s natural treasures, from the scenic Royal Coast Track, to the spectacular Aboriginal engravings at Jibbon headland and the jewelled waters of Port Hacking’s Simpsons Bay.

'I know the community has waited patiently for Bonnie Vale to reopen and now more families will be able to picnic at new shelters and barbecues, and relax on new lawns for a great day out,' Mr Evans said.

'New power outlets at 44 camp sites, a dedicated area for education or community group bookings and fully refurbished shower and amenity blocks have all been added to the site.'

National parks are a key driver of the visitor economy, generating $18 billion per year in economic activity and supporting over 74,000 jobs in New South Wales.