Threatened species experts have renewed hope for an endangered shrub after recent surveys found over 12,000 plants - a massive increase from the 592 plants that were recorded the same time last year. 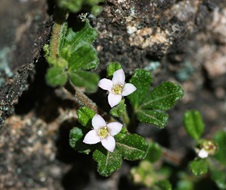 Darren Shelly, a Senior Threatened Species Officer who works in the Saving Our Species program said Zieria obcordata was severely impacted during the drought, prompting fears for the plant's survival.

"Zieria obcordata is currently found in only 2 small populations near Wellington and Bathurst.

"At one stage, we were down to just 200 plants left in the wild so this once in a lifetime regeneration seedling event really has thrown a lifeline to this species," Mr Shelly said.

"We spent time in Spring surveying 5 sites and couldn't believe that we found 177 old plants and 12,139 new plants – what a positive way to end the 2020 monitoring season."

With such a large regeneration event this year, even if 90-95% of seedlings are lost, Mr Shelly is confident population will rebound back to pre-drought levels.

"With the rainfall season over summer also predicted to be above-average, then this survival figure should be much higher, hopefully making for a record number of plants also recorded next Spring."

The Saving our Species program is now looking at other actions it can implement to continue aiding the conservation of the Zieria obcordata and will collect seeds and install fencing to protect the remaining plants from grazing by wallabies and goats.

"The local community is also instrumental in helping us survey and care for this species," Mr Shelly said.

"Earlier this year we put the call out to residents in the central tablelands to keep a look-out and report any sightings of this Zieria. It really has been a year of conservation optimism for this threatened plant and locals are still asked to report sightings of the Zieria obcordata to savingourspecies@environment.nsw.gov.au"

The Zieria obcordata is a small shrub, typically 10 – 40cm high and can be identified by its dark green leaves composed of 3 wedge-shaped leaflets and its flowers, which have four very small pale pink petals that fade rapidly to white. It is found growing on rocky hillsides or crevices between granite boulders.