National Parks and Wildlife Service (NPWS) botanists in Limpinwood Nature Reserve discover hope for several threatened plant species, plants so rare they are only known to exist along one escarpment within Gondwana Rainforests of Australia World Heritage area on the NSW/Qld border. 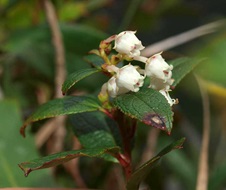 "We knew a handful of these very rare plants existed along the top of the cliff line but what we didn't know was how many plants were growing on the cliff faces or their condition," Mr Mallee said.

To survey the plants, NPWS engaged the skills of botanist Lui Weber, who got a special abseiling conservation permit, to abseil down the cliff face to conduct a threatened species assessment.

Mr Mallee said nearly 1000 Green Waxberry plants were found growing along the escarpment on either side of a rocky summit.

"The mossy cliffs of Limpinwood Nature Reserve are the only place in the world where these plants are found, so the discovery of a bigger population is fantastic news for this threatened species and really boosts this plant's chance of long-term survival," said Mr Mallee.

Mr Mallee said this species, was last known as a small population of only 5 plants recorded in 1982.

"Ninety-Four Lamington Eyebright plants were counted as part of this survey, a huge boost to our knowledge of this population," said Mr Mallee.

A further threatened plant, Wollumbin Dogwood Ozothamnus vagans was also re-discovered during the survey. Although known to exist in small populations in the Border Ranges area, 182 individuals were counted along the cliffs.

The aim of the survey was to document the extent of the populations of these threatened plants, assess their habitat condition and record potential threats. This information will be used by NPWS to undertake management actions needed to help care for the plants in the future.

What we found was that the plants biggest threat is climate change, due to their location in a fragile high-altitude environment.

"We are now focusing on ongoing management to help protect these rare species. This type of survey work adds to our knowledge of exactly what's out there and how to best manage it," said Mr Mallee.