The National Parks and Wildlife Service (NPWS) is pleased to announce the reopening of Brindabella National Park for campers and day visitors. 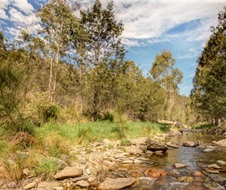 “Although Brindabella National Park was threatened by several fires, it was ultimately not burnt thanks to the efforts of NPWS and the other fire-fighting authorities,” Mr Evans said.

“However, in recent weeks the NPWS staff have been working towards making the Brindabellas safe and ready for public use again following recent storms and rain.

“Storms saw a large amount of timber fall on the tracks, but with the help of the Southern Tablelands 4WD club, all the tracks have now been cleared.

“Additionally, although there was substantial rain in recent weeks, the track surfaces are in good order given no vehicles were allowed in over summer.”

Neighbouring Bimberi Nature Reserve will remain closed for now, as it adjoins Namadgi National Park in the ACT, which remains closed following the devastating Orroral Fire.

“When you enter the park, please drive only on established roads and respect the national park,” Mr Evans said.

“With so much of NSW and the ACT burnt over the summer we are lucky to have such a beautiful, unburnt park at our ‘back doorstep’. Let’s look after it.”