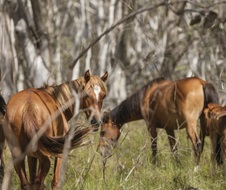 “I’ve long been advocating for a balance between recognising the heritage and cultural significance of the brumbies, while enabling active management to reduce their impact on the National Park’s alpine environment,” Mr Barilaro said.

“The appointment of the Kosciuszko Wild Horse Community Advisory Panel (CAP) means we can get on with the job.

“I’m thrilled to announce that Tim Johnson has been appointed Chair of the CAP and he will directly update the NSW Government and the National Parks and Wildlife Service (NPWS) on the work of the panel and progress within the Kosciuszko National Park.

“Mr Johnson is the man for the job – a nominated representative of the Snowy Horse Riders Association and he was integral in forming the National Heritage Listing over the Australian Alps.

“Wild brumbies have been roaming the Australian Alps for almost 200 years, and are part of the cultural fabric and folklore of the high country.

“This management plan is the best way forward to manage both the brumby population and the ecological protection of the National Park.”

Mr Kean said he is delighted to have the Chief Scientist Professor Hugh Durrant-Whyte appointed as the Deputy Chair of the CAP to advise both the Government and NPWS on the draft management plan for horses within Kosciuszko National Park.

“I very much look forward to working with the panel to reduce the damage the horses are having in this beautiful and iconic park,” Mr Kean said.

“I will take a science based approach on this issue. I want to make sure we get the best result for our natural environment.

“I have also asked my Department to recommence the re-homing program. This will start from next week, with the first horses to be removed within 4-6 weeks. This will be the first time in 2 years that horses have been removed from the Park.”

The Committees’ work will be informed by a survey of the horse population in Kosciuszko National Park, which is currently being finalised.