The NSW National Parks and Wildlife Service (NPWS) expects to begin the second of two small fuel reduction burns that were scheduled for Arakwal National Park, Byron Bay, Tuesday May 22 to reduce fuel loads near residential areas as well as help save the endangered Clay Heath. 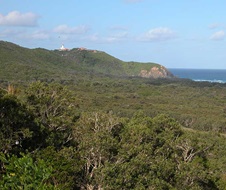 NPWS Team Leader, Jenny Atkins, said that while the area being burnt is small it's a complex task.

"This 2.2-hectare burn might seem small but the close proximity to residential areas means there is lot of planning and forethought that goes into such an operation," Ms Atkins said.

"Burns close to residential areas are very labour intensive involving many more fire fighters than would be the case in more remote areas.

"We will be working very closely with colleagues from NSW Fire and Rescue to ensure the burn goes smoothly.

"This is an ecological burn but we are also reducing fuel loads that will assist in limiting the intensity of any future wildfire that might enter the area during the hotter months," she said.

"The Clay Heath is home to threatened species such the Byron Bay Donkey orchid and the Dwarf Heath Casuarina which are only found in this vegetation community," Ms Atkins said.

"Fire is essential for the long-term survival of the Byron Bay Dwarf Graminoid Clay Heath and keeping country healthy and safe for the future.

"Many of the plant species in the Clay Heath need fire to stimulate seed release, new growth and to complete their life cycle.

"It is classified as an Endangered Ecological Community (EEC) protected under the NSW Biodiversity Conservation Act 2016 and more than 60% of this EEC is located within Arakwal National Park.

"Our Restoration Management Plan for the Byron Bay Dwarf Graminoid Clay Heath guides our program when caring for this important part of country and so far we have undertaken weed control, track works and removal of encroaching native vegetation in the Clay Heath over the last few years.

"When the burn is undertaken the walking tracks within Arakwal National Park at Pacific Vista Drive, Milne Street and Paterson Street Lookout will be closed.

"Pedestrian and vehicle control will be in place as part of Paterson Street, Milne Street and Pacific Vista Drive will have traffic control in place during the burn operation," Ms Atkins said.

Your say on Unicorn Falls plan