Citizen scientists are needed to note lyrebird calls in June as part of the Lowland Lyrebird Links project co-delivered by the NSW Government and Tweed Shire Council. 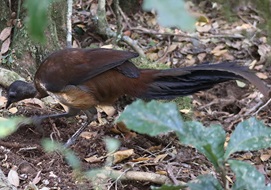 The project launches on Tuesday with talks by experts including the project’s fauna ecologist from Wildsearch Environmental Services, David Charley.

“We need locals to listen out for the vulnerable Albert’s Lyrebird – they have a loud, penetrating call, which is interspersed with mimicry of other species such as the satin bowerbird, laughing kookaburra and crimson rosella,” Mr Charley said.

“People love these lyrebirds for their well-known copycat skills – in fact, they are heard much more often than they’re seen.”

Albert’s Lyrebird has one of the smallest distributional ranges of any bird in Australia, occurring only in forest habitat in some parts of north-eastern NSW and the far south-eastern Queensland Border Rangers.

“We urgently need to understand how many of these birds are in the wild in Tweed Shire.

“This important work aims to improve Albert’s Lyrebird habitat and reduce threats through fox monitoring and control, as well as increase our knowledge of these birds through surveys and citizen science,” he said.

The Lyrebird Links project is co-funded for $341,000 over five years by the NSW Government’s Environmental Trust and Saving our Species program.

Bird surveys are undertaken during May and June as this is an active breeding time when the birds call vigorously. Albert’s Lyrebirds typically build nests on rocky ledges or cliffs in mature rainforests and wet sclerophyll forests, where females lay a single egg.

While undertaking lyrebird monitoring work in the area, Mr Charley discovered a new population of a flightless rainforest ground-beetle and a healthy patch of the native rainforest vine, Carronia multisepalea, the main breeding habitat for the endangered Southern Pink Underwing Moth.

Listening for Lyrebirds - a citizen science project in the Tweed

Landholders and interested parties should RSVP on Eventbrite to attend the launch evening in Murwillumbah on Tuesday, 11 May from 6–8.30pm.

RSVP Listening for Lyrebirds - a citizen science project in the Tweed