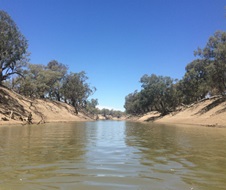 It’s been a dry start to the year in the northern Murray-Darling Basin with much of the Barwon-Darling river system under significant stress.

In a joint effort by the Commonwealth and NSW Government, water for the environment will be released into the northern rivers from mid-April, specifically to connect river systems across the Northern Basin.

“This is one of the first opportunities we’ve had to manage such a large scale connection – from the top end of the Northern Basin through the Barwon-Darling and down to Wilcannia with the possibility of reaching the Menindee Lakes,” said Commonwealth Environmental Water Holder, Jody Swirepik.

“Water for the environment is needed to maintain connection of northern rivers and the Barwon-Darling. Although our purpose is to improve river health, we do hope it will also relieve some of the pressure the community has been feeling.”

Assistant Minister for the Environment Melissa Price welcomed the decision to use environmental water in the northern basin. "It will provide benefits to both the environment and communities," she said.

Minister Price also welcomed the strong co-operation between the Australian Government and New South Wales to organise this event.

In January a number of river reaches in the Barwon-Darling River downstream of Brewarrina stopped flowing. The watering event will capitalise on more recent flows making their way down the Barwon-Darling system which provides an excellent foundation for enhancing in-stream ecological outcomes.

“We now have a chance to improve conditions for the inland river systems across northern NSW, and particularly to help our native fish like the iconic Murray cod and silver perch,” said Tim Hosking of the NSW Office of Environment and Heritage.

“Managed water for the environment will add to the runoff that recently entered the Barwon and Darling Rivers, and will aim to connect rivers, improve water quality, and provide habitat and food sources for native fish populations. It will also help to build up their resilience for longer-term survival when the system becomes dry again.”

Monitoring that is underway may help to understand the effects on native fish when river flows stop, and how fish communities respond once rivers start flowing again.

Ms Swirepik said the water delivery would not have been possible without the support of the NSW Government ensuring the environmental flows would be protected to pass along the system.

“I’d also like to acknowledge the goodwill and collaboration of many agencies in NSW, as well as the support of local councils and irrigator groups who have an interest in making this complex watering event work,” Ms Swirepik said.

“We look forward to sharing the outcomes of this event with the community.”

The connectivity event is planned to cover a distance in excess of 2,000km as releases from a number of northern rivers converge in the Barwon-Darling River. It is anticipated that environmental flows will reach Bourke by early May, and Wilcannia by late May.

Lookout for a better view of spectacular Wollomombi Falls