Water is being directed into the Tuppal Creek to improve the health of native plants, reconnect the creek with the Edward River and address water quality with carefully managed water flows. 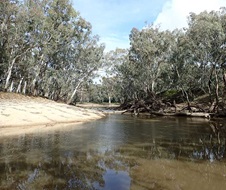 The NSW Office of Environment and Heritage (OEH) water manager Emma Wilson said the event is being managed in partnership with local landholders using water owned by the NSW and Commonwealth governments.

"The delivery of water (up to 3500 megalitres) will continue until mid-November aims to build on positive outcomes from previous events,' Ms Wilson said.

"The Tuppal Creek is a 60-kilometre long ephemeral creek in southern NSW that historically was an anabranch between the Murray and Edward rivers.

"The upper sections of the Creek rarely receive natural inflows, other than rainfall, because of the Tocumwal levee, built in the 1950s, that shuts the creek off from the Murray River.

"We have been working with landholders for five years to restore and rehabilitate this important waterway.

"It is home to nine threatened species including the bush stone curlew, diamond firetail and superb parrot as well as a vast range of other native plants and animals.

"Since watering began in 2012, we have seen improvements in the health of the trees, the quality of the water and the recruitment of water plants.

"Already this year we have seen stressed river red gums put on new growth and increase their canopy coverage.

"We have heard lots of native frogs calling and landholders have reported sightings of water rats and turtles foraging in the Creek.

"The number of frogs appears to be increasing each year environmental watering has been conducted which is likely the result of the improved water quality and recruitment of water plants.

"It's a terrific outcome for local landholders and the natural environment," she said.

The Tuppal Creek community is working on a long-term strategy to continue the restoration and rehabilitation of the Creek.

Gwydir Wetlands to open to birdwatchers