Conservation agreements help Save our Species 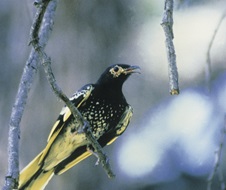 These conservation agreements cover three properties in the Bundarra-Barraba area near Tamworth, which is one of only two known Regent Honeyeater breeding regions in NSW, and one property near Coonabarabran.

“Conservation agreements like these protect the biodiversity values of properties in perpetuity, which means the agreement and management guidelines remain in place if the landowner sells the property,” Mr Speakman said.

Parts of these properties will remain farmland while the areas covered by an agreement will be managed for conservation, to strike a balance between environmental protection and economic potential.

Management actions for this SoS management site, which also happens to be within an internationally recognised Important Bird and Biodiversity Area, include preventing key habitat loss.

“It’s fantastic to have such a large area of threatened species habitat on private land under a conservation agreement,” Mr Speakman said.

People interested in protecting threatened species habitat on their private property by entering into a conservation agreement can contact the Office of Environment and Heritage at conservation.partners@environment.nsw.gov.au or the NSW Nature Conservation Trust at www.nct.org.au.