The NSW Government has released 80 critically endangered Spotted Tree Frogs into Kosciuszko National Park in the first release of this species since they were severely affected by the unprecedented 2019-20 summer bushfires. 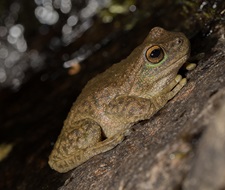 Minister for Environment James Griffin said the species became extinct in NSW in 2001 due to the same disease that almost wiped out the Southern and Northern Corroboree Frogs.

"The NSW Government's Saving our Species program worked with the Amphibian Research Centre in Melbourne to breed a conservation population of these frogs to help give the species a second chance," Mr Griffin said.

"In 2015, our threatened species experts released Spotted Tree Frogs from this breeding program into the wild, and it's estimated that there were between 250–300 frogs in the wild.

"Tragically, it's estimated that only about 10 of those frogs survived the devastating 2019–20 bushfires."

"Releasing these 80 Spotted Tree Frogs back into the wild despite all the setbacks this species has faced is a reminder to have optimism about the conservation work we're doing, because it's clearly making a positive difference."

Department of Planning and Environment Senior Threatened Species Officer David Hunter said the fragile alpine ecosystem where this species lives is unique to NSW and Victoria, and features native wildlife found nowhere else on earth.

"The Spotted Tree Frog is fundamental to the maintenance of ecosystem health in the NSW upland rivers where it lives. It occupies many streams where they are the only frog species, and tadpoles of this species consume nutrients and algae in large numbers," Mr Hunter said.

"They are also food for other species such as snakes, birds, mammals and predatory invertebrates, playing an important role in the food web."