In major recognition of his work in helping to save endangered frogs and other threatened species in South-Eastern Australia, OEH’s David Hunter accepted a Victoria Government Extinction Warrior Award at Zoos Victoria on last month’s National Threatened Species Day. 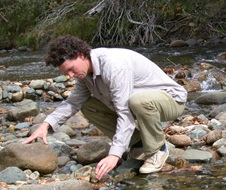 David’s award particularly follows his crusade for the critically endangered Southern corroboree frog, and the collaborative work he has undertaken with Zoos Victoria.

David has worked as a Threatened Species Officer with OEH in southern NSW for 15 years. Before that, he undertook his Masters and PhD on frog conservation, and worked closely with OEH on developing a range of threatened frog recovery programs, including those for both corroboree frog species.

David said that the award is mainly in recognition of his role in a collaborative project preventing the extinction of the Southern Corroboree Frog.

“I was very honoured to learn I was receiving the award, but not greatly surprised as this is a high-profile project for Zoos Victoria,” he said.

“It is very likely that the Southern corroboree frog would already be extinct in the wild if not for the efforts of OEH, Zoos Victoria, and Taronga Zoo.

“We now have a large and robust captive breeding program, more than 200 released frogs in the wild at a range of sites, and we are in a strong position to move forward and eventually deal with the key threat”. David started doing volunteer work on threatened frog programs nearly 25 years ago, and the focus of his work hasn’t really changed.

“I’ve spent a lot of time running around different landscapes working out how to help threatened species,” he said.

“I really enjoy the fact that my work has taken me to some very wild and remote areas, but it is the capacity for change in the way people think and behave, albeit often very slow, that gives me hope for the future of biodiversity conservation.

“I’m passionate about biodiversity conservation, and so feel very lucky that I can pursue this area as my professional career”.

When asked about his career highlight, David said that “in some respects, this award is a career highlight because it acknowledges what we’ve been able to achieve as a collaborative group”.

He said the award represents the efforts of many individuals and he also paid tribute to Zoos Victoria.

“The emphasis on securing viable populations of threatened species, which is the core of the Saving our Species program, represents a maturing in our approach to threatened species management. This is the only way we can ultimately achieve tangible benefits for threatened species and demonstrate the value of investing resources in this area of biodiversity conservation.”

This guide aims to assist in the identification of frog species commonly found on the highlands, tablelands, slopes, and plains of south-west New South Wales, contributing to a broader appreciation and knowledge of these interesting and important animals.