Minister for Primary Industries, Katrina Hodgkinson, and Minister for the Environment, Rob Stokes, have announced a decision on the future of line fishing from ocean beaches and headlands at 30 mainland marine park sanctuary sites in NSW. 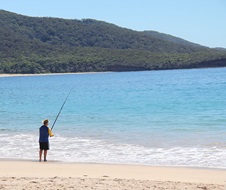 Based on independent scientific advice and environmental, social and economic considerations, the NSW Government will:

Ms Hodgkinson said the changes are consistent with the NSW Government’s new approach to management of the marine estate.

“The amnesty to allow shore-based recreational line fishing from 30 ocean beaches and headlands in marine park sanctuary zones was put in place in 2013 in response to the findings of the independent scientific audit of NSW marine parks,” Ms Hodgkinson said.

“The audit found that information was lacking with respect to some no-take zones, including ocean beaches.

“The amnesty was announced as a temporary measure, while a thorough risk assessment of the impact of these activities was undertaken.

“That assessment, completed by the independent Marine Estate Expert Knowledge Panel, found that recreational shore-based line fishing was a low-risk activity at 10 locations, which will be rezoned to permanently allow this activity.

“The panel’s findings have informed the NSW Government’s decision to retain the amnesty at 10 sites and lift it at 20 sites.

“The NSW Government has also consulted with community leaders and is acting to ensure marine protection on those beaches deemed to be at moderate or high risk.”

Mr Stokes said that enforcement of sanctuary zone provisions at the 20 sites will recommence immediately.

“These areas will return to a more natural state to be enjoyed for activities such as snorkelling and diving, as well as being used for scientific reference sites and educational purposes,” he said.

“A six-month advisory period will accompany the lifting of the amnesty; during this period recreational fishers found to be in breach of the rules will receive a caution however repeat offenders will be subject to standard compliance action.

“Risks to threatened fish and bird species in several areas will be reduced.”

Mr Stokes said there remained information gaps in relation to the impacts of this type of fishing in marine waters.

“To help fill these, the NSW Government will implement an enhanced data collection program so that fishing pressure and ecological condition can be more readily compared,” he said.

Further consideration of economic, social and ecological values will occur in each of the areas as part of planned reviews of management arrangements in each marine park.