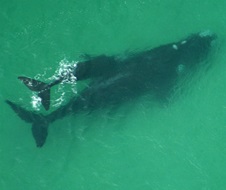 "We are seeing some truly spectactular images and vision of these precious and endangered animals, only this week we have been tracking two pairs of southern rights in Jervis Bay, south of Sydney," Mr Kean said.

"We can see from their behavior they use our city bays and estuaries as a kind of pre-school where they teach their calves how to breach and feed before heading off to Antartica for the summer."

Unlike humpback whales, south eastern southern right whales do not complete the 'humpback highway' and motor past us to Queensland waters. Instead they prefer to hang out in NSW's coastal bays and beaches to breed and give birth.

Every southern right whale, even the calves, have white hardened skin patches called callosities on their heads that create distinct, individual patterns. Analysis of the photos from the drones is then used to build up a library of images to identify individuals year on year and better understand their movements.